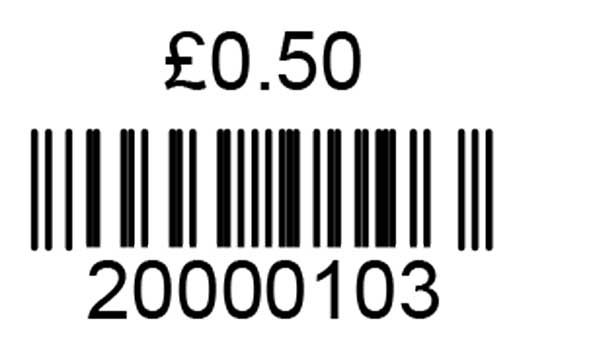 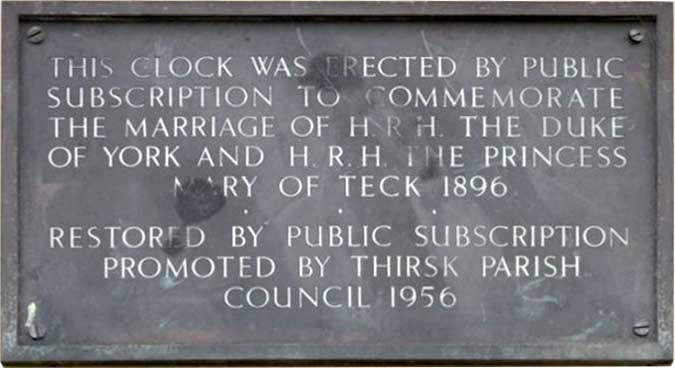 This brief essay has been compiled to essentially document the evolution of the Thirsk Market Place Clock Spire since it was originally conceived, to the present day. Some reference is also made to historical enhancements to the Clock structure where appropriate.

Information has been extracted from well known accounts of Thirsk by renowned historians, who I hereby give credit to, together with dated pictorial evidence from the internet (again courtesy of every contributor.)

The narrative is structured by firstly including an introduction to the concept, logic, justification and reasoning behind the origin of the Clock, followed by a concentrated report on the differing appearances of the spire over time. Pictures of the Market Place itself have been included within each era, to familiarise the reader with the surrounding buildings and perhaps the atmosphere existing at the time.

Introduction – The origins of the Clock

Since the days of old when Knights were bold, the 1145 AD Thirsk Market Place’s only architectural adornment was, like many other market towns of the period, a Market Cross. Records show that the Thirsk’s Cross was in existence in 1629, and so it is not surprising therefore that by the early 19th century it was becoming extremely dilapidated, being described at the time as a broken stump on severely worn steps. Originally it appears to have been a structure of some substance, with the cross ‘bearing on its capital, four dials facing the four cardinal points of the horizon’, standing on four steps and being some nine feet in height. 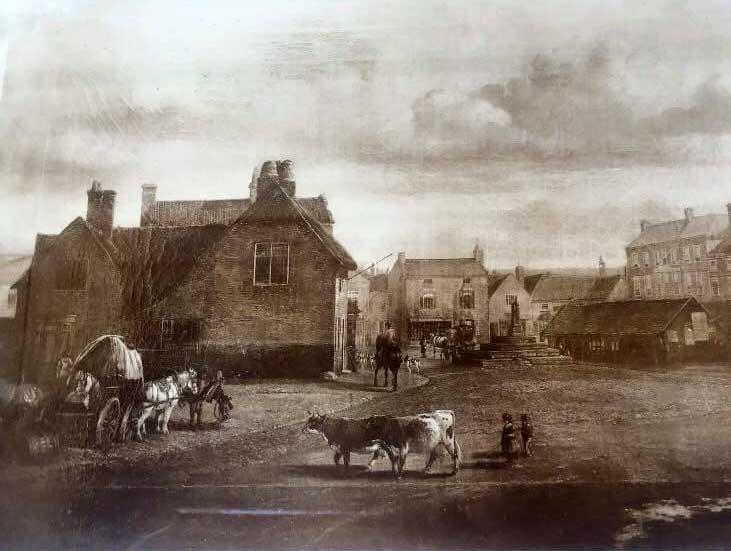 This picture is of an 1858 painting by Bartholomew Smith, illustrating Thirsk Market Place from approximately the entrance to Kirkgate, and clearly shows (right of centre) the Market Cross, the Shambles in front of the Three Tons Hotel, the Bull Ring and the buildings (left front) where the Post Office was to be built in 1909. The position of the Market Cross is roughly where the Market Clock would eventually be built. The Shambles and the old Court House were burnt down in 1834 and not demolished until 1857, thus casting doubt on the authenticity of the painting date as being 1858. 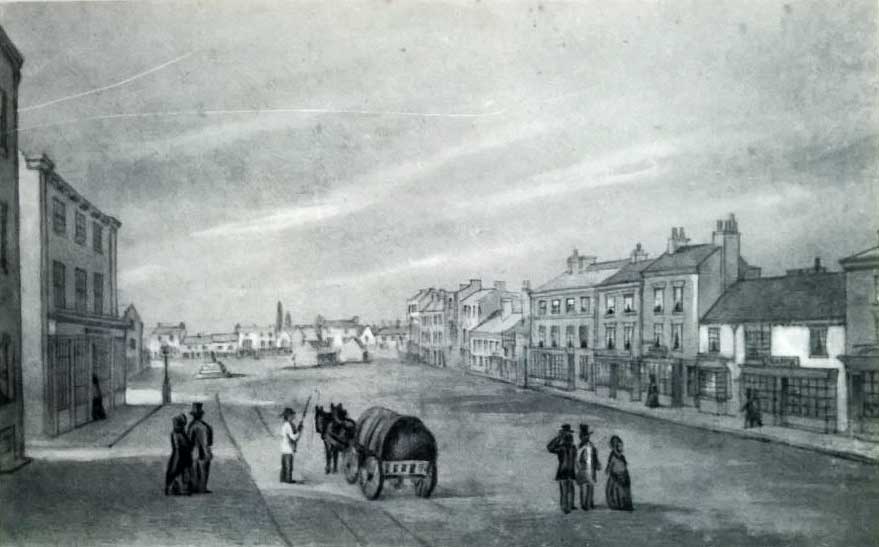 This is another painting at the time looking East and again showing the Market Cross steps and Cross Stump (centre left) with the Shambles still in place (centre), so again must date earlier than 1857.

In 1893 a public meeting was held to decide on a ‘suitable way of celebrating the approaching marriage of H.R.H. the Duke of York to Princess Mary of Teck’, later coming to the Throne as King George V and Queen Mary. Proposals were made ranging from water troughs, fountains and clocks. The final agreed design was for an illuminated turret clock and drinking fountain which was costed at £200. The old Cross stump and steps were removed and relocated to the left of The Hall where they can still be seen today.

Public subscriptions were slow in forthcoming however and the townsfolk became impatient to the extent that they erected a ‘dummy’ clock in the intended place.

Eventually in 1896 (some three years after the wedding) the clock was finally erected by a contractor who does not seem to have been recorded. 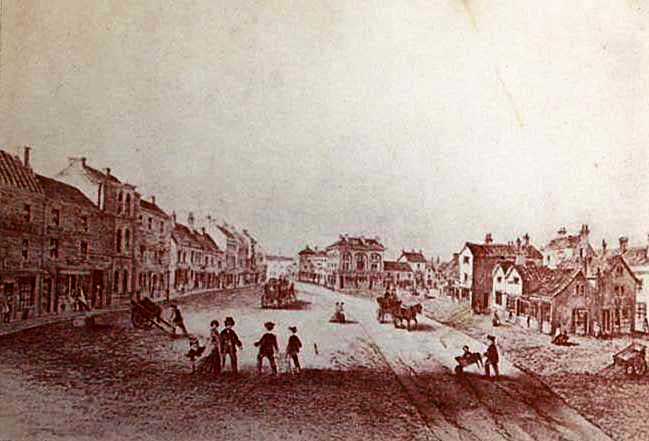 A sketch of Thirsk Market Place looking West at the time of the deliberations and money raising activity for the Clock, It can be dated as 1893 or 4, as there is no evidence of a Market Cross (presumably removed by this time) or indeed a Clock in this picture. 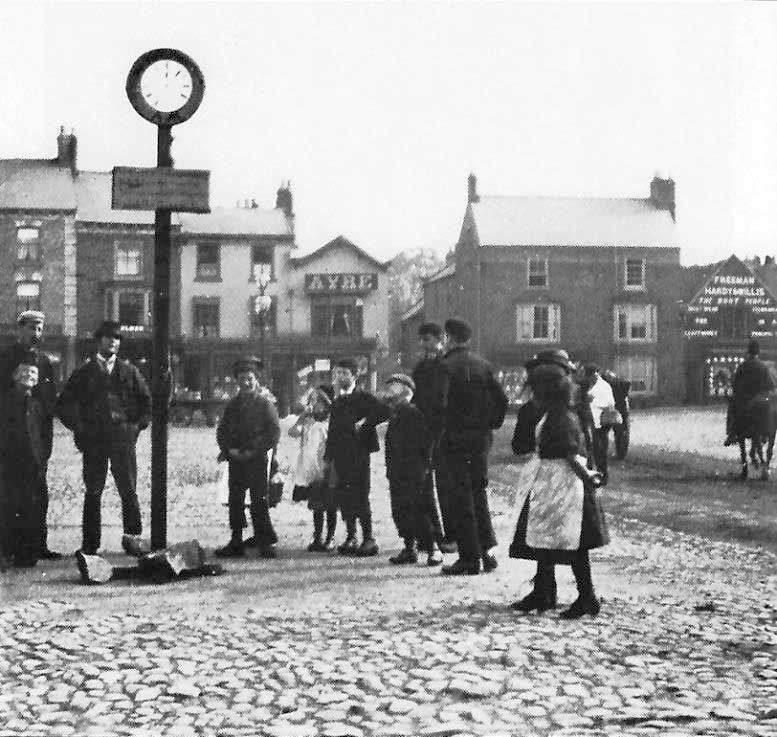 In 1895, to show the impatience that was growing with the delay in the construction of the clock, a dummy clock was erected on a pole on the location, with a clock face on barrel lids and a notice saying ‘No Tick Here!’ 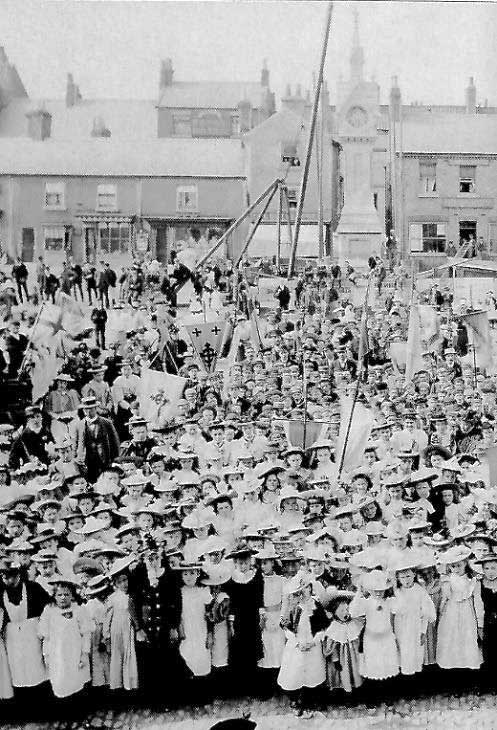 This picture taken in 1896 of a Thirsk Parish Schools Festival, photographed from the Fleece Hotel, shows the clock construction nearing completion with the crane and jib still in place.

The Clock was finally completed and an Inauguration ceremony took place in 1896 to celebrate the event. As agreed some three years earlier it had illuminated dials and incorporated a drinking fountain on the West side, and a water trough for dogs. Originally it was mechanically driven, and access to the mechanism for winding up and to address other maintenance issues was by a small door on the North side. 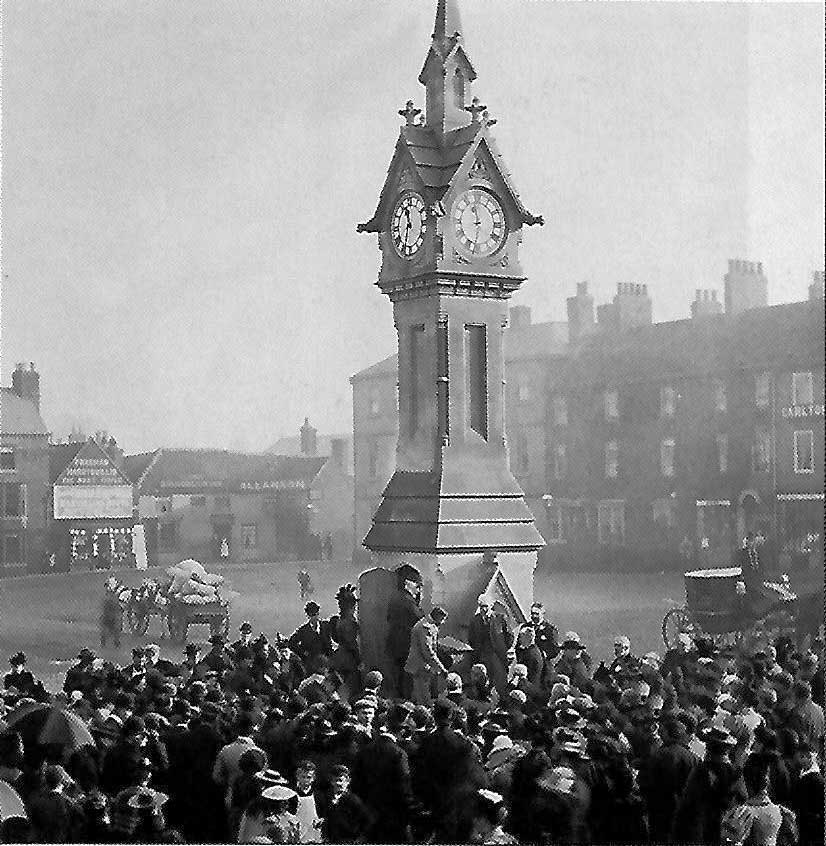 This picture illustrates the crowd surrounding the Clock at the inauguration ceremony in 1896 and clearly shows the West facing drinking fountain and the North facing door, together with well established background buildings (some of which remain today). The clock, at about 30 feet high including initially a five foot spire, has remained an imposing structure in a prominent position in the Market Place to this day.

Now to illustrate the changes over time regarding the profile of the Clock spire, with some reference to the gables surrounding the dials, the eaves and apexes, the following pictures and explanatory notes will hopefully identify specific architectural changes to the spire within approximate phases in time. To help identify the era of each phase, illustrations of the Market Place at that time have been included. Some notes are also included referring to the clock in general, where it is considered relevant to the study on the variations in the spire profile. 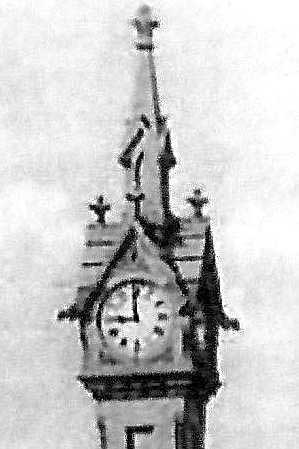 This close up picture of the top of the Clock shows it as it was originally built with tiled gables surrounding each clock face with cross finials on each apex and some sort of ornamentation at the convergence of the eaves. Topping this was an elaborately carved spire of some five feet in height, topped by a fleur-de-lis carving which had disappeared by 1905 or shortly after. The whole structure was unfortunately made from relatively soft sandstone so it did not withstand the ravages of time too well as further notes will relate. 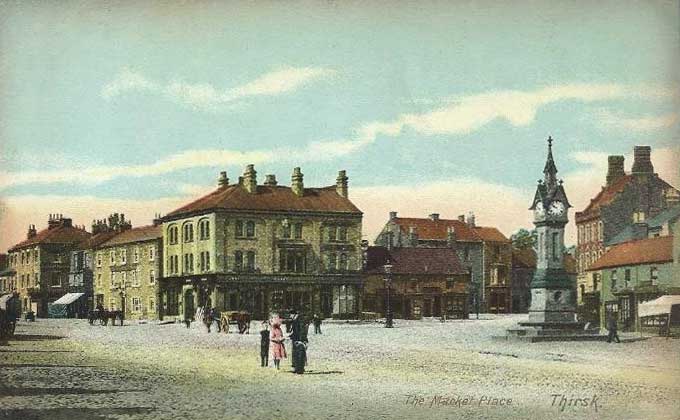 Numerous photographs exist showing the Market in the years following the erection of the Clock. These two both show the clock with finials on the apexes and can be reliably dated prior to 1904.

We now enter an historical period of uncertainty as conflicting accounts from reputable historians tend to be at variance with each other and clearly are often at odds with datable pictorial evidence. The implications are that in or around 1905 the iron finials disappeared, whether by a catastrophic occurrence, such as a lightning strike, or were removed due to safety concerns, or as part of the metal reclaiming policy prior to WWl, remain unclear. 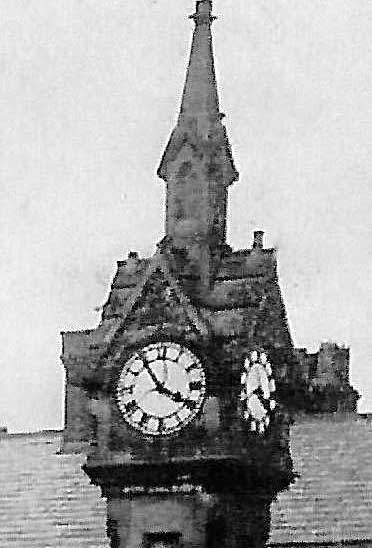 What the close up picture reliably dated as 1910 shows, are that the cross parts of the apex finials have been cut off, leaving the bases in place together with the eaves ornamentation. Subsequent photographs show the finial stumps still in place up to about 1912, as shown below Later well dated photographs of 1914 of military parades prior to WWl do show that the finials have been removed completely however.

What is without doubt, the clock remained essentially like this, including the spire which remained unchanged, until at least 1921, as again pictorial evidence (particularly a British Pathe film clip of a Thirsk carnival in 1921) shows. 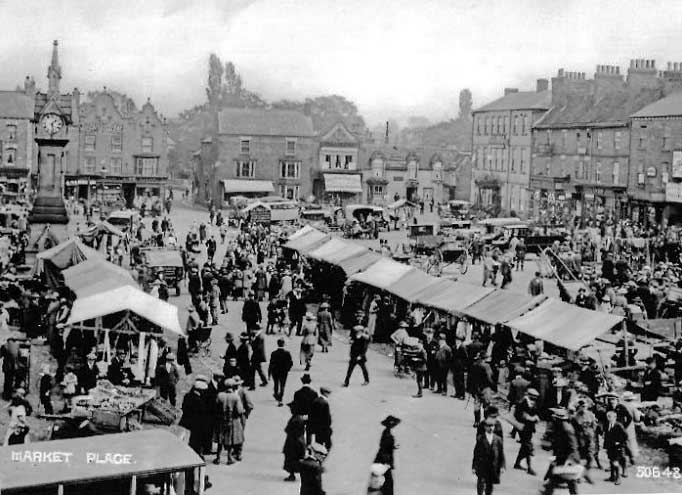 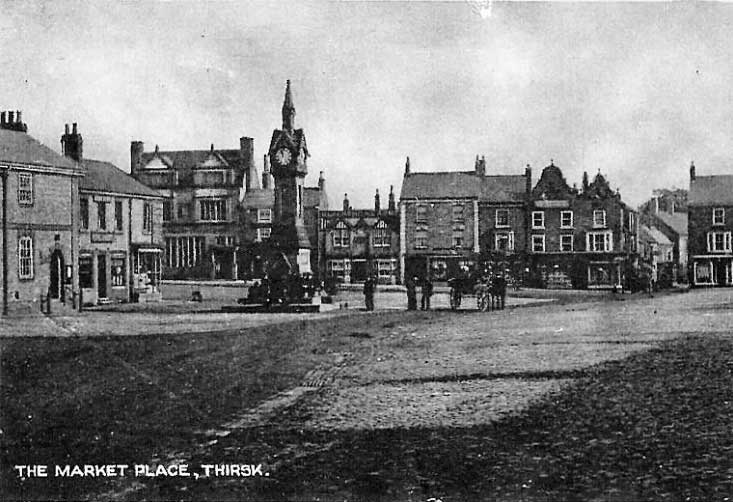 The two pictures are typical postcard pictures of Thirsk Market Place around 1912 showing (above) the Market in full swing and (below) by contrast a little less busy. 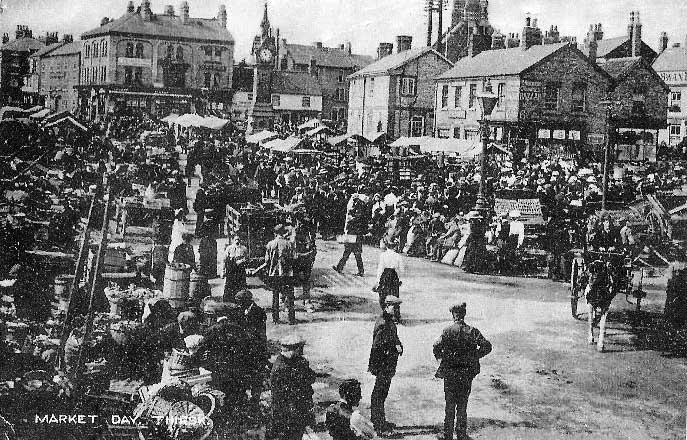 This picture, again showing a busy Market, is no later than 1914 and the clock finial stumps have gone altogether as well as the eaves ornamentation, as far as can be seen. 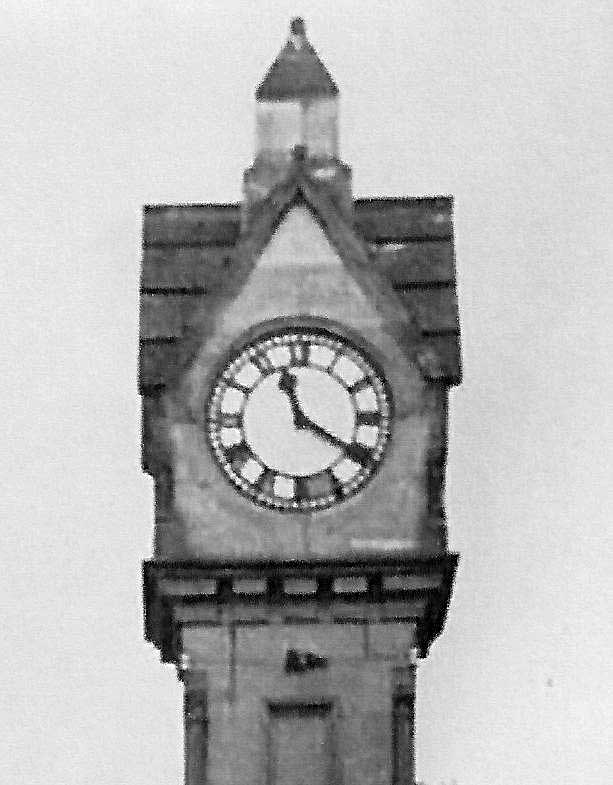 Some time in the early 1920’s the tall elaborately carved Clock Spire disappeared, some reports suggest again due to a lightening strike, other rumours persist that it was the work of vandals, but perhaps more logically it was removed by the Council due to its deteriorating condition. It was replaced by a simple cube on the original spire plinth with a pyramid shape topping it off which remained unchanged for the next 65 years.

During the years between about 1920 and 1987 the Clock needed constant maintenance due to the crumbling sandstone both outside and inside. In 1937 the mechanical mechanism was replaced by an electric system and the water fountain was removed just before the war. In 1956 major restoration work was conducted, in 1969 the Clocks electric system was completely rewired, and in 1987 the clock was completely renovated at a cost of over £6,000.

So whether by an ACT of God, an Act of Hooligans, or an Act of the Council, the resultant replacement simple spire, endured for the longest period of time so far. 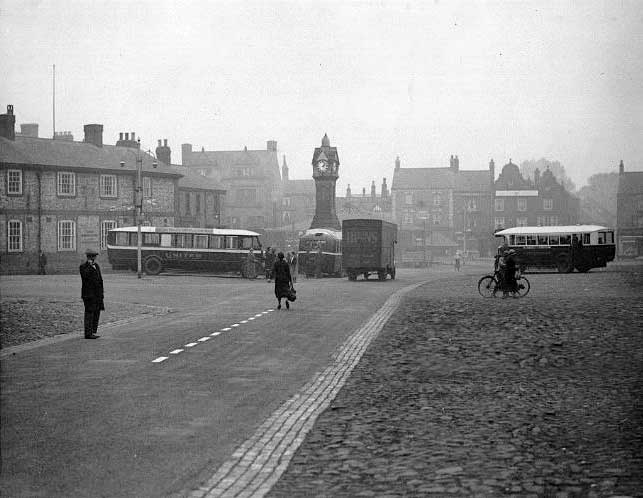 This 1933 picture shows the simple spire. 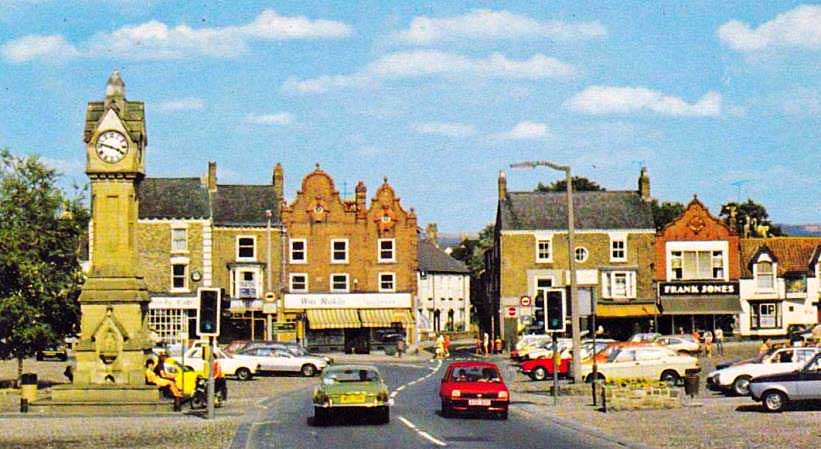 This 1983 picture, being some 50 years later shows the geometric spire still in place

The picture illustrates the scaffolding etc. surrounding the Clock in 1987 when major renovation work was being carried out. 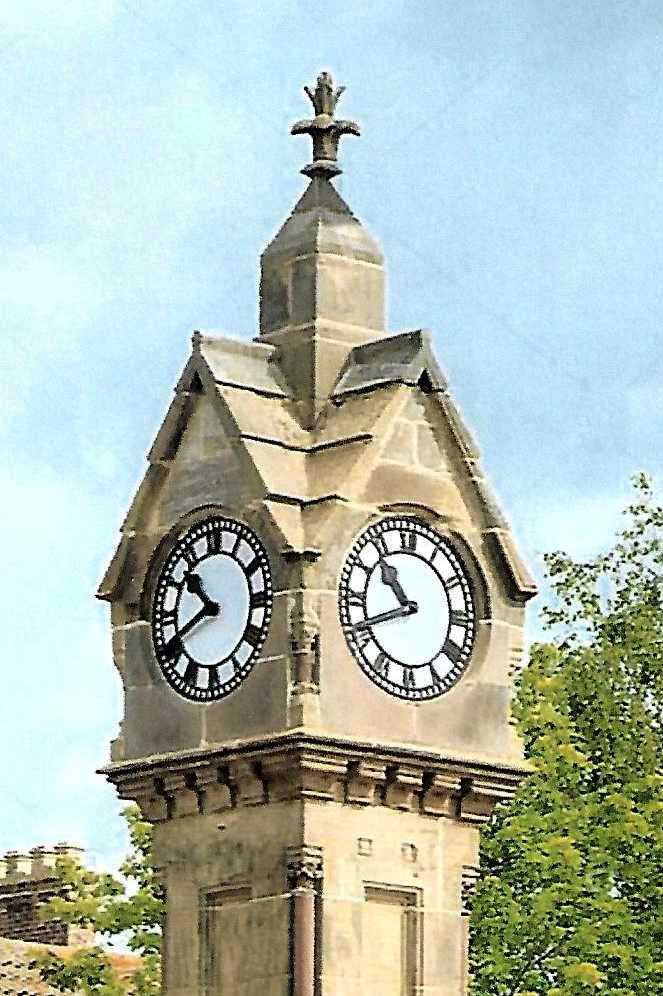 Coincidental with the major restoration work carried out in 1987, the spire at the top of the clock was replaced to that shown here. The pyramid type top was replaced by a more elaborate structure with a double row of Fleur-de-lis carvings on a revised plinth, as illustrated, which was donated and carved by the local stone masons Dales of Thirsk.

From this time onward it became apparent to the Local Council that the clock would need constant maintenence and frequent repairs on an on going basis. This work is therefore now being conducted on a contractual arrangement by suitable specialists. Such items that have needed recent attention are replacing some of the clock dials, replacing the North facing access door, stonework cleaning, and servicing and replacing many parts of the mechanical and electrical movements.

It is hoped that with such dedicated attention, the clock (now 120 years old) and spire (now a mere 30 years old) will last at least for another 120 years and continue to be a focal point for Thirsk Market Place. 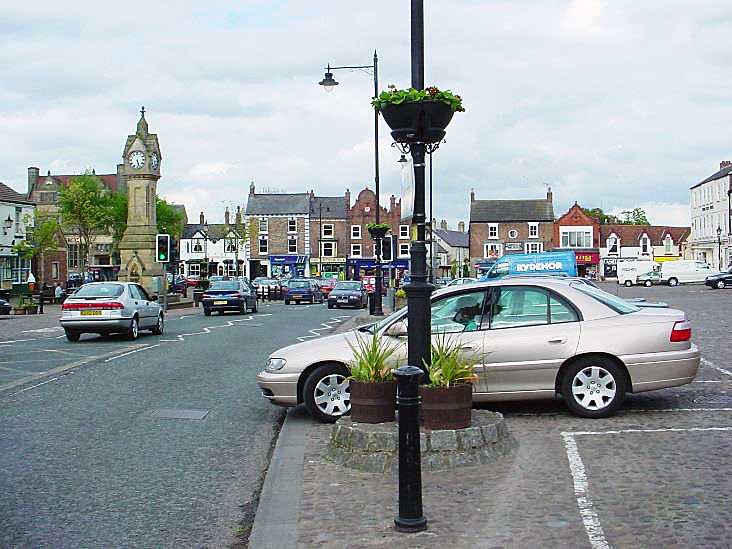 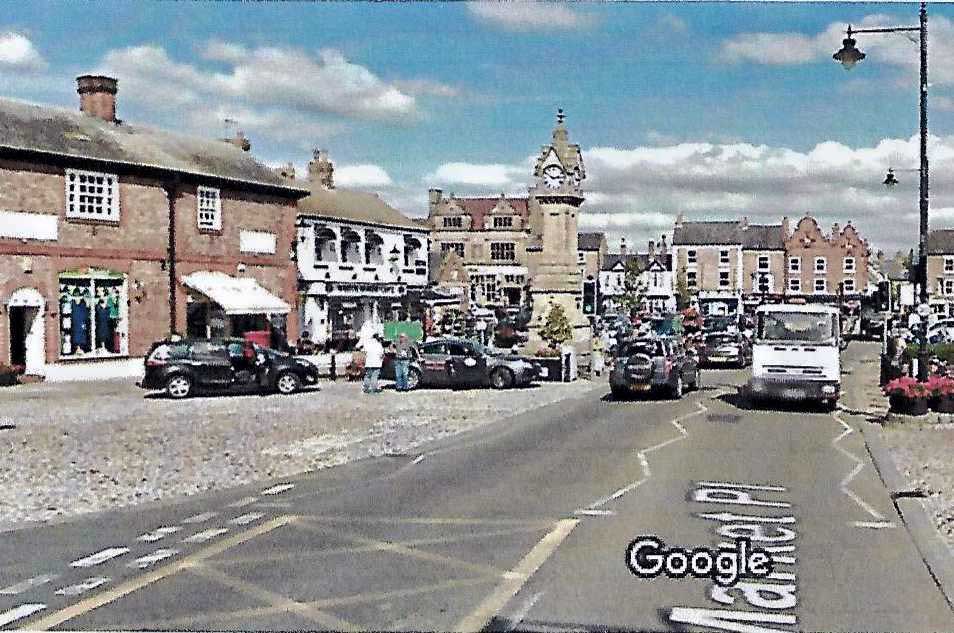 In keeping with latest technology, this picture is from a 2017 Google Street View, showing the Clock and Market as it is today.

A 2012 panoramic view of Thirsk Market Place with the Clock centre stage.